From Selma to Stonewall, the common attribute of our country’s most powerful social justice movements is resilience. Unbreakable presents a historical arc of the experiences of LGBTQ people over the last 12 decades, weaving a musical tribute to how our community has evolved, triumphed, suffered, and soared. This new musical co-commissioned by HMCKC and 8 other choruses from across the United States is brought to you by Tony Award-nominated composer Andrew Lippa (I Am Harvey Milk, The Addams Family, Big Fish, The Wild Party). 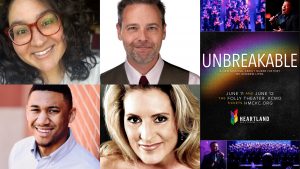 HMCKC presents the Great Plains premiere of UNBREAKABLE on June 11th & 12th at The Folly Theater. Tickets on sale @ hmckc.org

Heartland Men’s Chorus (www.hmckc.org) is Kansas City’s gay men’s chorus, now in its 36th season. Founded in 1986 with 30 singers to make music, HMCKC quickly became a safe oasis for a community scarred by fear and hatred.  Now with 80 singers, HMCKC is a vital part of Kansas City’s robust arts and cultural scene, making the historic Folly Theater its performance home for 27 years. More information can be found at Heartland Men’s Chorus.